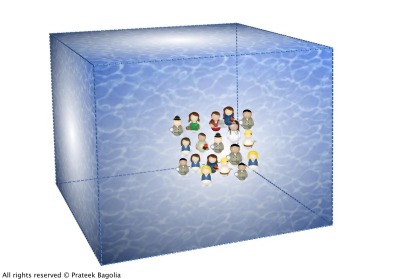 Presence of human energy and gravitational ripples in space-time

In my last post, I proposed a correlation between force of love and quantum physics. Now I wish to extend that inherently characteristic coherence to another pair of universal manifestation, Human beings and the relative effect of gravity, the bending of space and time.

As I have discussed earlier in one of my previous blogs, “The blue rock we call home” that the increasing human population has evolved into a global phenomena of Anthropocene. We are one of the greatest forces that shape this planet, but apart from the planet, primarily we affect each other’s lives more than we might think. If we are to imagine that there is a universal force much greater than us, that guides the course of this vast manifold, of which we inhabit only the most trifling fraction; I do not see the point in believing in an external power affecting our existence, because to begin with, that force essentially manifests as us.

We know that the Universe deeply interacts with the field of gravity; even the forces, energy and matter that have not been detected by our intelligence yet, exert their presence through gravity. It is not hard to derive that human presence has immense gravitational effects not just at the individual micro scale of each other’s day to day life, but in the big picture of the entire race’s future. Matter derives mass by interaction with the Higgs field and the amount to which it does, directly proportions the relative effect of gravity. Presence of matter bends space and time, which we know as gravity from general relativity. We are no exception to this, our presence bends space-time in the same way as any matter or energy does. It is not yet clear how the exact interaction results but we would soon discover in times to come. Every manifestation of matter in this cosmos has consciousness by virtue of its existence, in human beings that consciousness is clearly discernible with its centre in the mind along with its presence in every cell of the body. Human beings may exert space-time gravitational ripples in two ways, through their physical mass and their mind’s energy field. The interaction at both levels may seem different but they really are not, nothing is exclusive to the inclusive ways of the Universe. The major distinction in mind’s interaction is that it acts as the directing component in the course of events, through its awareness or consciousness.

The absolute gravitational interaction of human existence is clearly evident with the increasing population or technically, increasing mass. Under the effects of increasing gravity, we witness time dilation and increasing entropy or randomness, that culminates to a point when the system becomes completely stagnant and returns to a state of low entropy with no change and a static state, if the space containing that system remains constant. Usually matter tries to escape the vessel that contains it instead of giving up its energy to return to a low entropy state, and if it can it sure will. However, if the containing space is itself expanding, the entropy will keep increasing. Its easier to understand when you just consider a simple comparable scenario of a bustling metropolitan and a laid back country town. The metropolitan with its busy life, faces extreme case of randomness and represents a growing physical system. With that it manifests its relative effects of gravity by bringing and attracting more people together with the hopes of better opportunities; but it can only grow to a point until it reaches a deadlock, where the only way to accommodate all that population is by increasing the bounds of the city. As opposed to a small town, that enjoys a casual ordered lifestyle with little or no randomness. In the case of a metropolitan we see that they gain a momentum once they reach a particular population size, where after they just continue to grow, while in the case of small towns they remain small and experience a relatively small growth unless they reach a certain threshold when they can transform into a larger city with a potential to further grow.

The above example demonstrates that, gravitational effects with respect to an increasing quantity and energy of human presence is also accompanied by higher momentum, as it should. The time dilation effects are also seen with increasing population, specially in matters of governance, as it requires more input from all the people of a society, nation or the world. The developing nations with higher population and a system of democracy face these time dilation challenges; development and change is often faced by opposition and is an extremely slow process. As under higher gravity time slows down, we can observe delays in changes in our society and the world, along with increasing chaos. Restoring order becomes a challenge, as it requires more time, because in large systems, it becomes difficult for a single individual or a few, to change the motion of an entire system. It is easier only if the entire system interacts strongly together.

The only way to exploit the gravitational effect of an increasing human mass is by creating tools and platforms, that would enable strong interaction of human gravity. Ultimately, as a distinctly sentient species, we ought to know better by essentially learning to regulate the amount and the pattern of human mass, the way we wish for it to flow as a system, in order to be creatively productive.

© Prateek Bagolia, (2015). Unauthorized use and/or duplication of this material without express and written permission from this site’s author and owner is strictly prohibited. Excerpts and links may be used, provided that full and clear credit is given to Prateek Bagolia and [thearcanuniverse.com] with appropriate and specific direction to the original content.